eCommerce is a big market and Magento, one of the premium open sourced platforms that many companies use allows for flexible shopping systems. With these flexible solutions it is important to have the right technology to ensure proper payment processing and protection for you and your customers.

At Cartis we leverage Elavon’s systems to ensure this is possible.  Below are some important notes about the Free plugin developed to ensure customers can utilize their Magento site using Converge.

Get Our FREE Plugin

1. Get Our Free Plugin and Unzip

4. The content of unzipped extension should be copied into the Magento “app/code” folder

6. To update the database schema and modules run command: bin/magentosetup:upgrade 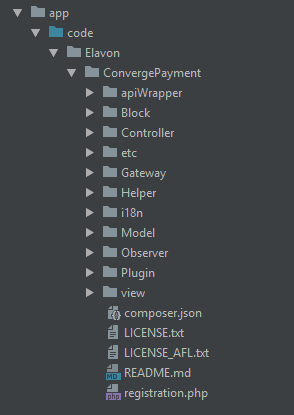 After successful installation, please follow the steps below to configure the various integration options supported by this plugin.

Log in to the Magento Admin Panel and navigate to Stores -> Configuration under the Sales heading click the Payments Methods.

On top of the page there will be a field called Store View, where you can find different levels for your configuration. Choosing one of the levels available will influence the fields available for configuration for the Converge Gateway payment method.

The only field from the configuration page available for the store level is the title of plugin.

To capture new Authorization Only transaction using Converge Payment plugin you need to make sure that payment action option is set to Authorize along with other options:

For Authorization and Capture transaction only one option should be changed:

Payment procedure is similar for guest and logged in user, with only exception that logged in user has option to save credit card for later use.

To initiate actual payment via Converge you will have to access Checkout page from Magento store view. After you populate Shipping Address (for products with weight) and click on the next button you will be presented with Review and Payments page where you can select Converge Gateway as payment method.

Need Help? Get in Touch

As a merchant you will be able to perform additional action on already captured transactions directly from Magento Admin page without opening Converge screens.

Cancel action is only permitted on Authorization Only transactions in Magento. Once this type of transaction is captured from Store View, the merchant can go to the following screen:

Clicking Cancel in Magento deletes the transaction in Converge (similar to the Void action). The transaction is in a cancelled state in Magento which prevents the merchant from making any additional changes to this order, even offline.

Void action is only permitted on Sale transactions in Magento.

You will be presented with Invoice creation screen. At the bottom of the screen you see a dropdown with 3 options:

Selecting Not Capture in the dropdown and clicking the Submit Invoice button will create new Invoice in Magento, but nothing will be sent to Converge. The invoice will stay in Pending state, and once invoice is opened you will have Capture button which can be used to actually Capture (convert to Sale) the transaction in Converge.

Selecting Capture Offline in the dropdown of Invoice creation screen and clicking on Submit Invoice button is used when the merchant wants to manually convert a transaction to Sale (e.g. problem occurred). In Magento, the invoice will be captured with status PAID, but nothing will be sent to Converge, so merchant needs to make sure that transaction in Converge is properly processed. Merchant will no longer have option to make changes to transaction in Converge from Magento screens.

Selecting Capture Online in the dropdown of Invoice creation screen and clicking Submit Invoice is used when the merchant wants to automatically convert an underlying transaction to Sale in Converge. Invoice will be captured with status PAID, but unlike the capture offline action, merchant will still be able to make additional API calls to Converge for this transaction (e.g. refund…).

As a merchant, you can define which products allow subscriptions, view and edit subscription records, and create an order with subscription products.

Need Help? Get in Touch